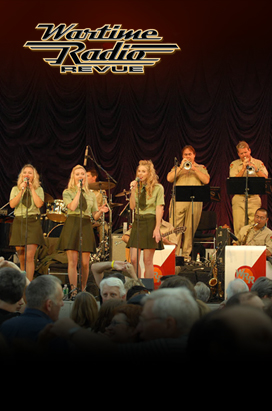 Interspersing the hits of the 30's and 40's, breaking news-stories from the war-years, original songs, and 40's style radio commercials, this band is like taking a time-machine back to a WWII U.S.O. show.

“BROADCASTING LIVE, all across America, to all the ships at sea, and to all our boys in uniform stationed abroad, this is
WARTIME RADIO REVUE!”

And so begins another evening with Pete Jacobs and his 16-piece big-band. Interspersing the hits of the Thirties and Forties, along with late-breaking news-stories from the war-years, as well as several original songs, and even some 1940-style radio commercials, listening to this band is like taking a time-machine back to a World War Two U.S.O. show. And with their three young female vocalists, a hot, driving rhythm section, and eight-piece horn section, the “classic-swing” sound is both full and authentic!. And when you add in their “armed-forces style” khaki-colored uniforms, it’s all there!

Formed in November of 1997, they quickly established themselves with appearances at such swingin’ landmarks as The Hollywood Bowl, New York’s Lincoln Center for the Performing Arts, Catalina’s Casino Ballroom, and have been a regular monthly featured band for many years at Disneyland.

Dancing is what it’s all about! Few bandleaders understand – and can deliver – what dancers want better than Jacobs. “I actually started this band because of my own interest in swing-dancing.  When I started learning the Lindy-Hop (the original swing-dance from the 1930’s), I wanted to re-create the music the way it was played back then when the big-bands would play for packed houses and dance halls.  It doesn’t matter how great the musicianship of the band is if you can’t dance to it.” And the people who flock to every swing music venue they can find overwhelmingly agree!

CLICK HERE FOR MORE INFO ABOUT THE WRR SINGERS